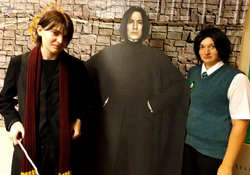 To create a magical backdrop for the event, members of the Young Adult Advisory Panel worked to transform the library's meeting room into Hogwarts with stone walls, floating candles, and Potter-themed decorations. After being sorted into houses, participants were able to test their Potter knowledge by taking their OWLs and NEWTs; show off their casting skills in wizards duels; enjoy tasty treats, including chocolate frogs, from Honeydukes; and witness a Very Potter Flashmob, which was organized and choreographed by Rachel Mahoney, a teen member of the Young Adult Advisory Panel. The evening was capped off by a Potter-themed hypnotism show by Richard Darshwood.

In addition to several door prizes, which included signed books by various YA authors and Harry Potter merchandise, the library also gave out prizes to the winners of the Harry Potter art contest. Katyna Henson won Staff Favorite for "Feathered Mailmen"; Jamie Logsdon won Most Creative for "Dragon Lady"; and Jessica York won Best Overall for "The Golden Snitch". Rachel Mahoney was drawn as the winner of the Grand Prize for the YA Summer Reading Program.

"It's great to see so many teens still excited by the world of Harry Potter," says Tammy Blackwell, Young Adult Librarian. "The last book came out over seven years ago, but the fan base isn't dwindling at all. If anything, it's growing as more and more children discover the magical world JK Rowling created."

The library offers a variety of programs for teens throughout the school year, including after-school programs and a writing group. Programs begin the first week of September. For more information, please contact your local branch of the Marshall County Public Library.