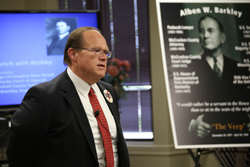 "Preserving our heritage is important," says Nickell. "Younger generations need to know who Alben Barkley is and how significant he was to our area."

The local history session was held as part of the library's Lunch and Learn series, which is a free educational program open to the public. The next session, which is scheduled for October 16, will focus on the new Affordable Care Act.